Designed and developed by Pemamek, PEMA WeldControl 300 is one of the most advanced robot programming and welding systems available in the market. Thanks to its modern modules and three different user levels, the programming software is fast to adapt to any one-off production.

*PEMA WeldControl software can be sold and integrated only with PEMA welding and production solutions.

Robot welding is fast, efficient, and accurate. Although, in many cases, the programming of the robot is the bottleneck of the production. PEMA WeldControl 300 product family is designed so that no extra hours will be spent on programming. Thanks to the three different software levels, OFFLINE, CREATE, and SCAN, even programming one-off production can be completed rapidly without any manufacturing interruptions.

PEMA WeldControl 300 OFFLINE (OLP) software is developed for 3D-CAD-based offline programming. Welder, user-friendliness, and efficiency in mind, the system has received a tremendous amount of good response also from the experienced offline-software users.

Contrary to OLP, in PEMA WeldControl 300 CREATE the measurements and features of the welded work-pieces are fed to the system in parametric form. Based on these given parameters, the system models the work-piece and generates the welds.

Thanks to the automatically generated welding paths, the programming speed of the welding robots can be completed incredibly fast.

Additionally, the CREATE programming system is suitable for automated programming of one-off products that are similar in type but may have some deviation. To enable this, in the definition phase a base created for geometrical variations of workpiece dimensions and features.

Even more effective welding of heavy steel structures can be carried out with an advanced multi-passing function, which is available for both WeldControl 300 OFFLINE and CREATE systems.

In the spotlight of the PEMA WeldControl 300 product family is PEMA WeldControl 300 SCAN. The software is a tremendous aid for a welder: it is fast to program and easy to use. In order to run the production process, one interface needs only one operator and robots. Thanks to the simplicity of the system, the usage of robots can be adapted a lot faster and they are used more efficiently.

The software gives immediate feedback from welding which enables the welder to constantly develop not only his user experience but also his knowledge and know-how in robotized welding.

Thanks to the SCAN system’s adaptivity, the robot is capable of filling the grooves according to deviations.

When welding large steel structures, the biggest challenge is inaccuracies in geometric measures caused by the measure tolerances. These inaccuracies in measures and shapes, originating from component production, are one of the biggest factors that block and slow down efficient robot welding.

The problem is that inaccuracies cause the fluctuation of the welding groove cross-section and position. In other words, errors will occur between the drawings from CAD-modelling and pre-welds on the real work-piece. Before, fixing these errors with traditional robot welding systems have not been able to bring out the welding quality that would be good enough.

Now, PEMA WeldControl 300 SCAN, has outdistanced that challenge. The system will automatically provide a suggestion of the welding paths according to the modeling data. The are will be scanned based on the measured geometries the paths will be corrected to meet the real measurements. Briefly, the robot software is re-positioned according to the actual measurement information so that the workpiece and its position will be consistent with reality.

After a precise geometry,  from the work-piece, there’s little need, if any, for a robot to retrieve the information.

Automatically created robot program is simulated and possible conflicts can be detected.

PEMA WeldControl 300 and example of parametric designing of the work-piece.

Many times large-scale steel structures call for multi-pass welding. Due to the inaccuracies in workpieces, the volumes of the grooves vary which causes variation in the needed amount of welding consumables. In adaptive welding, consumable usage is controlled according to the actual need in respect of the welding parameters.

Unlike in ordinary welding automation systems, PEMA WeldControl 300 SCAN the workpiece is measured and the data is analyzed within the software’s built-in system. With the help of the measurement data received from 3D-measuring, each welding pass is located layer by layer to the appropriate welding groove.

The system measures groove volume and counts the number of needed passes in each section of the weld.

The sizes of the welding pass, or the number of welding consumables, are controlled adaptively. This evens out the filling rate before completing surface welds. In thick walls, the total amount of filling passes is significantly large, but with advanced software also these parameters can be controlled.

PEMA WeldControl 300 Scan is designed particularly for the special welding needs of one-off products’ thick walls. For more simple products, also the software can be tailored to be real. The software has several features for example for 3D-tubular pieces due to the different welding seams and adjustments.

Thanks to the adaptive adjustment, the robot is able to fill the grooves according to deviations.  This results in a high-quality one-off product.

PEMA welding robot station with two integrated Skyhook positioners. The other positioner can be loaded while the other is in the welding process. All this is controlled by PEMA WeldControl 300 OFFLINE.

The most effective tool for robotized welding

Like in WeldControl 300 OLP and Create, also in Scan the most important features are simple implementation and programming. The user-friendly, yet unique interface is developed according to feedback received from varying users.

The innovative software enables welders to learn the crucial basics just in few days, where welder needs only a sufficient amount of welding experience. There is a possibility also for additional features and training for the most advanced operators. 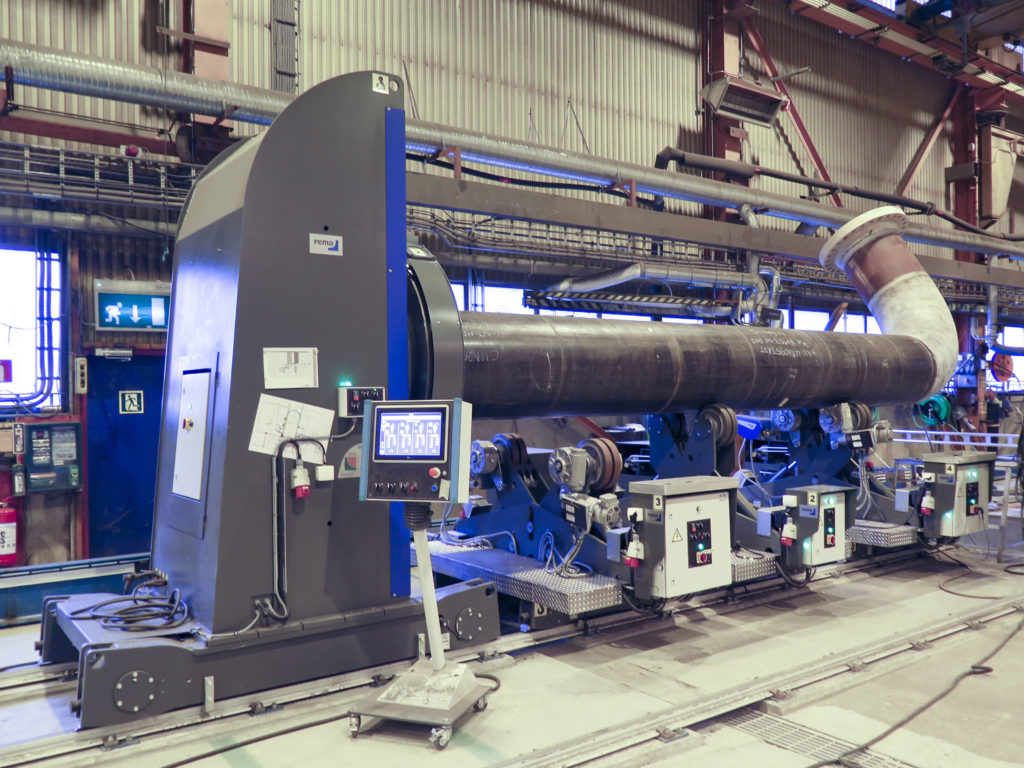 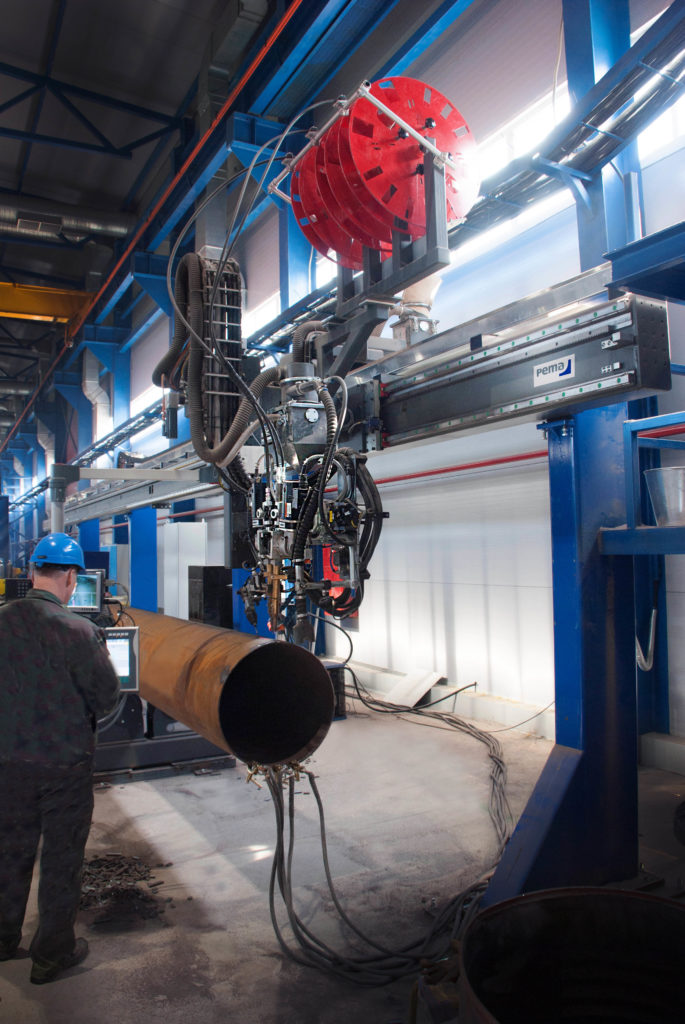 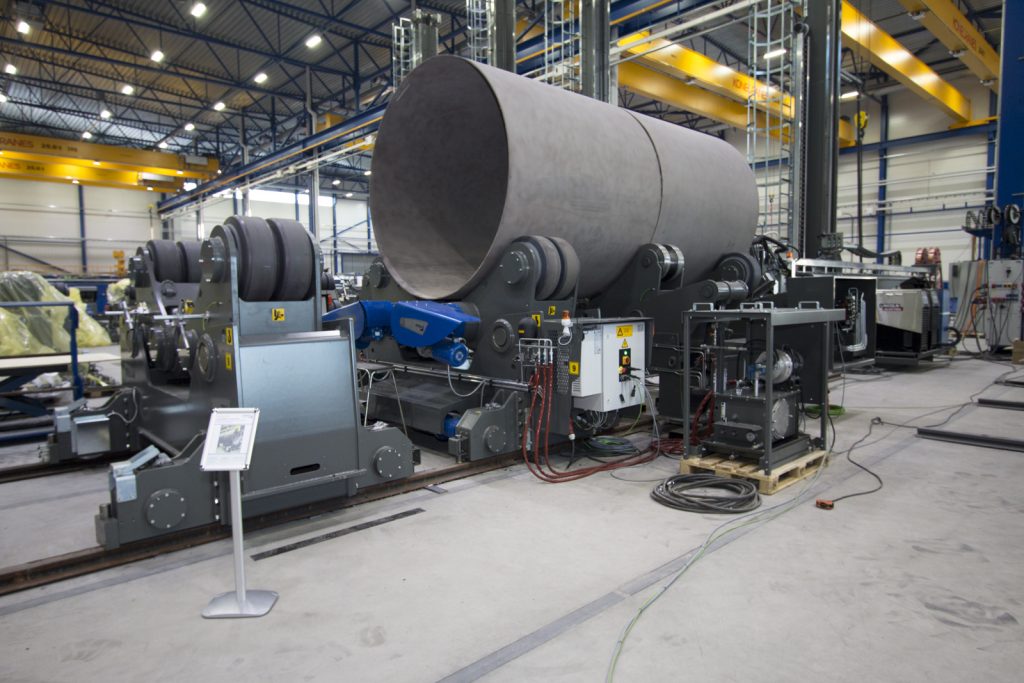 ABC of automated assembly and welding: what does it mean, and why so many benefit from it