Challenge:
Clear demand on the market for higher output and better quality. Successful management of change from manual welding to an automated solution.

Solution:
PEMA MDS 4×4 and PEMA WeldControl 100 boom installed on rails and with two welding heads – single and twin SAW heads in the other end of the boom and a MIG/MAG head in the other.

From manual to automated welding

After competitive tendering, APL decided to purchase PEMA C&B assembly line consisting of PEMA MDS 4×4 with two welding heads installed on rails – single and twin SAW heads in the other end of the boom and MIG/MAG head in the other.

In addition to the dual-welding head Column & Boom with PEMA WeldControl 100 control interface, the delivery included a PEMA TW 5000-25 assembly line. The assembly station consisted of a jig-type assembly unit with powerful hydraulic adjustments and a set of rollerbeds.

Together with a PEMA column & boom, automated welding of work pieces can be carried out reliably and according to highest standards of productivity and welding quality.

The delivery also included a turn-key installation, commissioning and production ramp-up support package by Pemamek’s technicians, as well as one week of on-site user training. The assembly line was delivered in June 2015.

Due to the transition from manual welding to modern automated welding, some resistance was abundant among welders. However, after the new production bonus system was introduced, the attitudes rapidly changed. Soon everybody preferred to use the assembly line instead of manual way in order to get higher production rates and better quality.

“The project turned out to be a success story: factory testing, commissioning, assembly and training were carried out in professional and efficient way within agreed delivery times.”

The objectives of gaining higher production rates and better quality were fully achieved. Manufacturing is now about four times faster when compared to manual welding. In addition, the welding quality has improved tremendously bringing in customers who have extremely high standards.

– Recently, we noticed a clear market demand for high-quality, high-output fabrication. We decided to invest in developing our manual-based welding function and asked for tenders from various suppliers. Pemamek was soon able to earn our trust not only with its proposal – a column & boom assembly line, but also with its long experience and reliable views for the future, says Dmitri Kljutšnikov, the CEO of APL Production AS.

APL’s repeat order in February 2016 comprises a C&B assembly line consisting of a PEMA MDS 3×3 SAW Column & Boom installed on rails and with a PEMA WeldControl 100 control interface. It comes with both single and twin SAW welding heads, as well as a special heating system, for cold operating conditions. The C&B is also combined with a A-type rollerbeds. In addition to the assembly line, APL also ordered PEMA APS three-axis positioners with respective loading capacities of 1500 and 3500 kgs.

– The project turned out to be a success story: factory testing, commissioning, assembly and training were carried out in professional and efficient way within agreed delivery times. The objectives that were set in the beginning of the project were completely achieved. That’s why we have now ordered another assembly line and a couple of positioners from Pemamek for delivery in April-May 2016 says Dmitri Kljutšnikov. 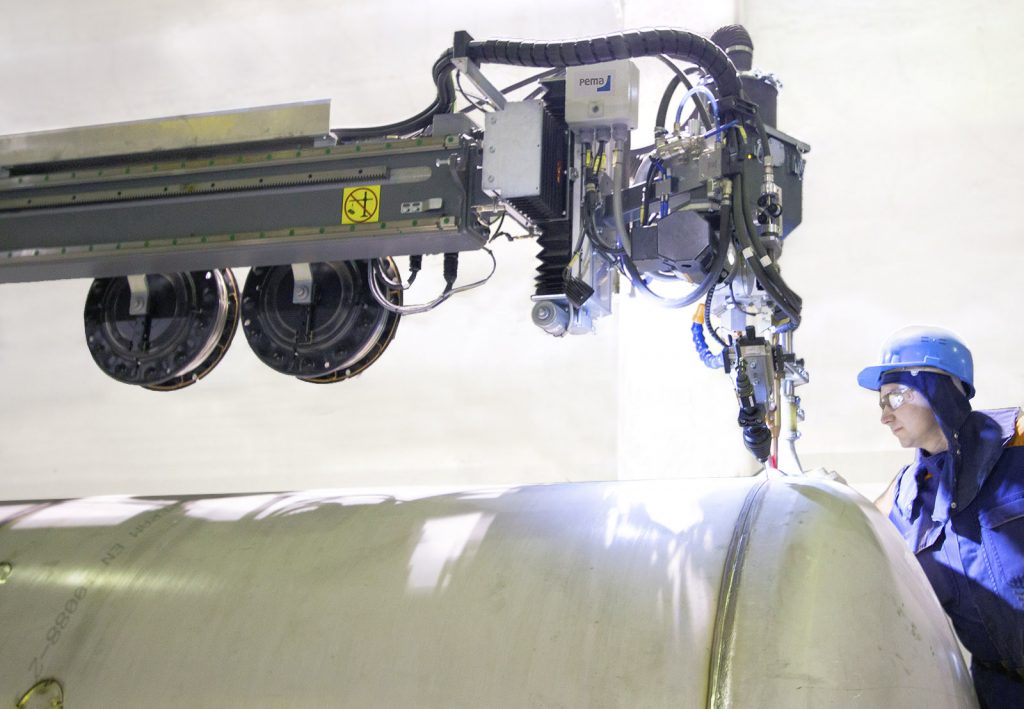